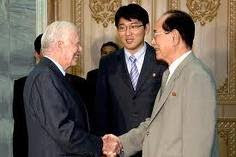 Though former president Jimmy Carter went to North Korea recently on an unofficial capacity, to free an imprisoned American, he did talk to high-ranking officials in Pyongyang, in a way to test the waters for a possible breakthrough in the current deadlock with the nuclear disarmament/security negotiations. In an op-ed piece in The New York Times, Carter believes North Korea is willing to come back to the negotiating table. He concludes: "A settlement on the Korean Peninsula is crucial to peace and stability in Asia, and it is long overdue. These positive messages from North Korea should be pursued aggressively and without delay, with each step in the process carefully and thoroughly confirmed."