Crossing the Border in the DMZ 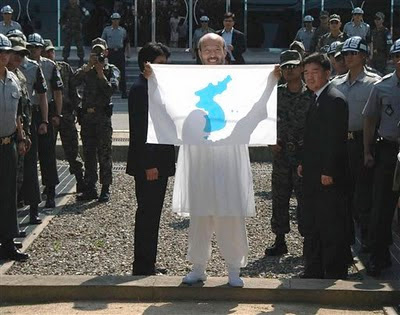 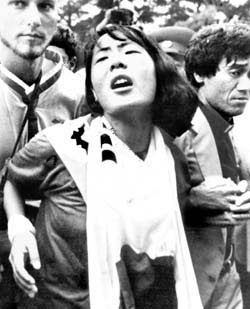 Rev. Han Sang-ryol (top photo) crosses the Demarcation Line separating the two sides of Korea into South Korea after visiting North Korea with a message of peace, reconciliation and hope for reunification. Until few years ago, this act would not have caused a stir in South Korea, used to an upsurge of inter-Korea exchanges that brought steady border crossings, trade and joint ventures during a decade of inter-Korean rapproachement, brought on by former president Kim Dae-jung's "Sunshine policy" and followed on by former president Roh Moo-hyun -- who himself crossed the boarder on foot similarly to North Korea on an official visit.

But now, with the conservative Lee Myung-bak government in place, the border has been closed off and the clock has been turned back to the old days of open confrontation and hostilities between the two sides of Korea, and Rev. Han is likely to be prosecuted with the archaic National Security Law that outlaws unauthorized contacts with North Korea or activities "supporting" North Korea.

Rev. Han's action is reminiscent of similar feat by college student Im Soo-kyung (bottom photo) in 1989, whose unprecedented and courageous action inspired Koreans towards inter-Korea reconciliation. Im spent five years in prison for crossing the border (in violation of the National Security Law), along with Father Moon Kyu-hyun, who accompanied her on the crossing in support.