American Youth Calls for "Peace Forest" in the DMZ 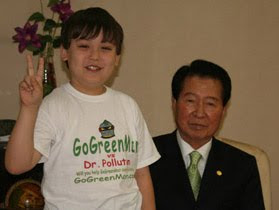 Jonathan Lee, a 13-year old American youth living in Mississippi, is a young environmental activist who has initiated his own youth environmental movement (meeting with world's leaders in the process). He is also proposing a "peace forest" for children of both sides of Korea in the Korean DMZ, and visited both South and North Korea with his proposal. He surprised his parents by proposing a trip to North Korea. He was inspired on the Korean reconciliation idea while meeting with former South Korean president Kim Dae-jung when he was 10 years old (photo above). Perhaps the world needs more young activist-citizen diplomat like him to resolve contentious issues.