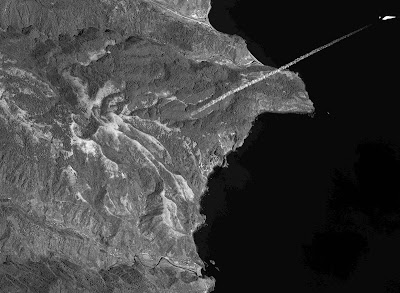 From Foreign Policy in Focus. By Jae Jung Suh, an associate professor and director of Korean Studies at the School for Advanced International Studies at Johns Hopkins University.

North Korea fired hundreds of artillery shells into waters near the disputed western sea border with the South last week, and the South Korean military returned warning shots, heightening the already high tension on the peninsula. The rising tension came amidst recent signals from Pyongyang that it wanted to negotiate a peace treaty to formally end the Korean War. If peace negotiations began, Pyongyang could return to the Six Party Talks on ending its nuclear programs. So what's going on? Are we about to see another bout of military confrontation or another round of negotiations? MORE
[The satellite photo shows the exhaust trail of a North Korean rocket launch on April 5, 2009.]