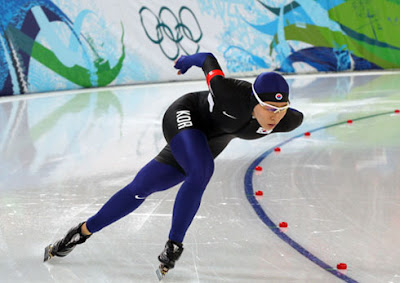 South Korea has been doing well in international sporting competitions lately, venturing out of its traditional strongholds such as archery, table tennis and taekwondo. In the 2010 Winter Olympic Games in Vancouver, South Korean competitors won the first set of medals outside the short track skating category -- in long track speed skating (the photo shows Lee Sang-hwa winning a gold in women's 500m). And Kim Yu-na is widely expected to win a gold medal in the ladies' figure skating competition. With such strong performances at the recent winter Olympics, South Korea may be in a better position to gain hosting right for future winter Olympics (overcoming failures in several recent attempts).

And of course, most Koreans are imbibed with the contentious drama with the American skater Apolo Ohno. See a column in the GlobalPost: US speedskater Ohno locks horns with Korea.