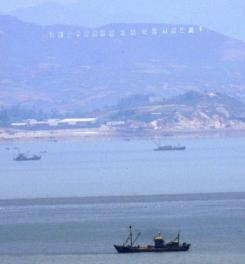 On top of this, North Korea has fired artillely shells near the disputed sea border with South Korea, for which South Korea responded likewise. The photo shows a narrow sea border area on North Korea's west coast, observed from South Korea's Yeonpyeong Island in disputed waters in the West Sea (Yellow Sea) -- indicating the proximity, and hence the danger of clashes, of the two sides on the disputed border. The disputed sea border is another ramnent of the Korean War since the sea border was not mentioned in the armistice agreement but rather declared unilaterally by the UN-led forces on behalf of South Korea. To avoid future confrontations in this area (there were several fatal clashes in the past), the dispute over the sea border called the Northern Limit Line (NLL) needs to be settled in inter-Korea and multilateral peace/security negotiations.