Designer Jeans Made in North Korea 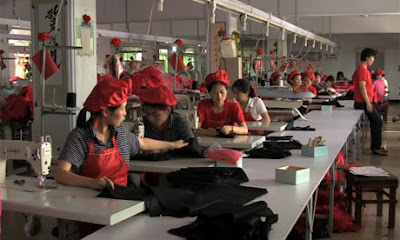 [Follow-up news: The store in Sweden abruptly reversed its decision to stock these jeans, saying it does not want to be "associated with a political issue" (or did they yield to political pressure?). The jeans are available online.]

In a surprise development, designer jeans will be sold in upscale stores in Sweden that have been manufactured in North Korea. The NoKo (a play on the abbreviation of North Korea) jeans are products of a joint venture between Swedish entrepreneurs and a North Korean firm (above photo shows the garment factory in North Korea making the jeans).

Besides the obvious buzz surrounding this peculiar development, what is really interesting is the motivation behind the Swedes. They were not big garment company executives looking for low wages, rather they started with a simple desire to get to know North Korea better (see their story on a video on their website) and the jeans idea (transmitted in an email to North Koreans) blossomed into a concrete project that may test the waters for more robust joint ventures with North Korea. The fact that North Korean authorities approved this venture with apparent novices suggest the willingness on the part of North Korea to try new economic ventures with the citizens of the outside world.

It also helped that Sweden and North Korea have diplomatic relations, as United Kingdom does, hence examples of joint ventures with North Korea coming out of these two European countries. It also supports an argument that economic engagement with North Korea may aid in reduction of tensions that North Korea has with the outside world. With diplomatic relations in place, there are many opportunities of multi-level contacts and exchanges between peoples and officials that may lead to better mutual understandings and a path towards reduction of tensions and animosities. On this end, the U.S. authorities need to heed, especially in light of the upcoming trip to North Korea by the special envoy Ambassador Stephen Bosworth next week.

When it comes to men’s clothing the first thought which sparks in my mind is designer jeans. Anything will be suitable with designer jeans might be tees, shirts, jackets or blazers. Men in designer jeans look cool and handsome!