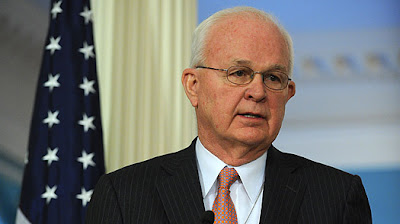 After ten months in the office, it looks like Stephen Bosworth (photo), the U.S. special envoy for North Korea, will be actually going to North Korea for diret talks there. This comes after ten months of what seemed like a circumvention of the problem -- holding consultations with all the parties involved with the Six Party Talks with the exception of North Korea, which did not bring a breakthrough in the stalled process towards nuclear disarmament and security guarantees. It is hoped that the Bosworth trip to North Korea, and President Obama's Asia trip, will bring some tangible progress on these issues.

On a related matter, columnist John Feffer argues for a secret negotiations for a comprehensive agreement between the U.S. and North Korea, sans media coverage that may derail the process.