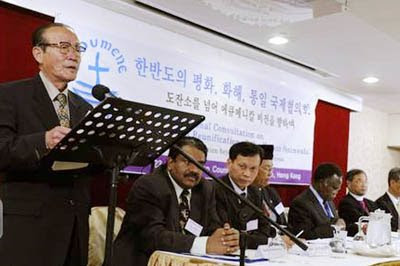 Korean Christians in south and north Korea have been early pioneers in civilian, inter-Korea reconciliation efforts as they made initial contacts that paved a way for comprehensive interactions between Koreans separated by division, war memories, ideological confrontations, and geopolitics. Their meetings, held initally in third countries in Europe, Japan and North America, led to the reaffirmation of the desire of Koreans towards reconciliation and reunification.

International ecumenical organizations such as the World Council of Churches (WCC) have been supportive of these efforts. The WCC and the Christian Conference of Asia hosted the "International Consultation on the Peace, Reconciliation and Reunification on the Korean Peninsula," October 21-23, 2009 in Tsuen Wan, Hong Kong (see above photo). At the Tsuen Wan Consultation, 135 people attended from churches and ecumenical bodies all over the world including church representatives from both North and South Korea, and proclaimed the Tsuen Wan Communique.