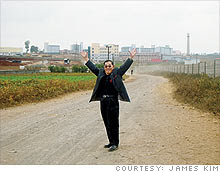 In a respite from preoccupation with the North Korean nuclear/security issue, U.S. media is beginning to take notice of other issues, such as joint ventures and business interactions in North Korea, that shed some light on changes occuring within North Korea.

The CNN carried an interview with Hyun Jeong-eun, the chairwoman of South Korea's Hyundai Asan, which has pioneered inter-Korea joint ventures with investment of $272 million in North Korea, in projects like the Kaesong Industrial Park and tours to Mount Kumgang.

Videos on foreign investment and business activities in North Korea can be watched on www.youtube.com/businessNK
Check it out!