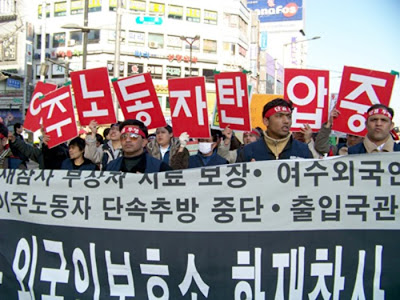 After a long lull, South Korea is again appearing in the reports of the Amnesty International, recently on the reemergence of political repression under the Lee Myong-bak administration, and now another report has shed light on abuses of migrant workers in South Korea. The Lee administration is busy signing free trade agreements and touts globalization, yet it is not dealing seriously with this critical issue at home, especially in light of South Korea's hard-earned gains in Korean worker's rights. (The photo shows a demonstration by migrant workers in Korea demanding their rights.)