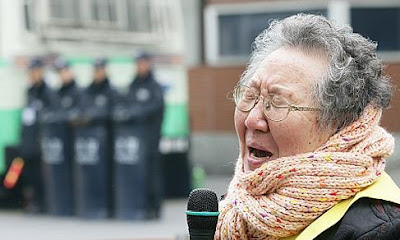 Kil Won-ok (age 81) is former "comfort woman"-turned-activist calling for the Japanese government's formal apology for the sexual enslavement of girls and women (taken mostly from colonial Korea) during the World War II. She was only 13 years old when she was forcefully taken to the war fronts to "serve" Japanese soldiers. Battered and ashamed, she could not return to her home in northern Korea when the war ended and lived alone and poor in the south, keeping her silence until she joined a group advocating for the rights of former "comfort women."

She and representatives of the Korean Council for Women Drafted for Military Sexual Slavery by Japan came to the U.S. recently on the occasion of the second anniversary of the passing of the US House Resolution 121 that called for Japan's formal apology. Even with this passage and others in Canada and European assemblies, Japanese government is not coming forward with an apology -- in a stark contrast to postwar Germany's handling of the holocaust. The photo shows Ms. Kil during the "Wednesday Demonstration" in front of the Japanese embassy in Seoul, Korea. The women have staged the weekly demonstrations every Wednesday continuously for the past 17 years, yet not a single Japanese official has come out and acknowledged the women's presence.

This story breaks my heart and I am so proud and in awe of their never ending efforts to have their voices heard. I just hope that the Japanese gov. will apologies before these women all pass away...