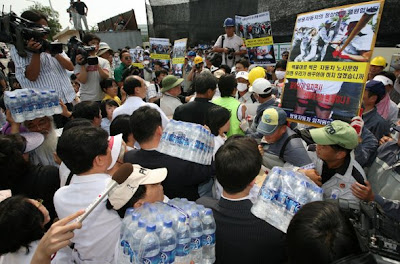 In addition to the Lee Myung-bak administration's suppression of citizens' political rights, crackdowns on labor unions have intensified, in a return to the days of authoritarianism. The following statement in support of South Korea's labor movement was initiated by the U.S.-based Transport Workers Solidarity Committee (endorsed by San Francisco Labor Council) in calling for a solidarity picket at the Korean Consulate in S.F.

The Korean labor movement is under a brutal attack. Hundreds of police and hired thugs are attacking the Ssangyong Motor sit-in strike by auto workers. These workers are demanding negotiations over their layoffs. The company has refused to negotiate, instead, with the support of the state the management illegally hired thugs to beat up the workers using baseball bats, steel pipes and martial arts weapons (nunchaku). They came on July 21, 2009 to the plant to seriously injure the striking workers which they did. They beat up workers who had no possibility of resisting arrest or defending themselves. [The photo above shows Ssangyong management blocking the passage of water and supplies to the striking workers.]

This vicious attack on the Ssangyong Motor workers has been condemned by the Korean Confederation of Trade Unions KCTU. They have called for a General Strike and also for solidarity actions at all Korean Embassies and Consulates around the world. The use of organized privatized thugs to attack workers must be protested throughout the world.

These attacks are not only against the striking auto workers but also against the Korean Teachers and Education Workers Union (KTU, Jeon Gyo Jo) for criticizing the Lee Myung-bak administration. The government has announced plans to discipline all 17,000 members of the union such as firing 88 individuals who led or contributed to the statement. The union has charged that the government is seeking to exterminate the public school teachers.

At the same time, 13 thousand Korean National Union of Media Workers (KNUM) is striking to protest a new law that would increase censorship under the Broadcasting Law and hurt workers rights under the Irregular Worker Law. Both these anti-labor laws were pushed through without debate by the ruling Grand National Party to suffocate democracy and freedom of the press.

Please join with us in the solidarity action to let the Korean government that this union busting and attack on Korean labor rights has no support from the working people of the United States.