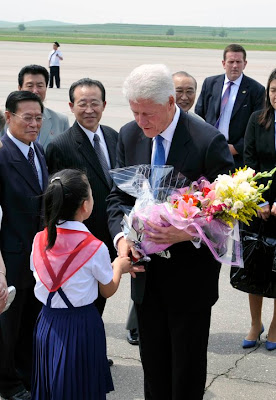 So Bill did make it to Pyongyang after all -- nine years later. In 2000, after the unprecedented trip by Secretary of State Madeleine Albright to North Korea, there was a talk of then President Bill Clinton's visit to Pyongyang, which didn't materialize due to the end of his term and the election. Bill joins Jimmy Carter (in 1994) as former US Presidents making visits to North Korea.

Bill Clinton is in Pyongyang to negotiate the release of the two detained US jounalists, but his stature and the fact that he is the husband of the sitting Secretary of State Hillary Clinton, suggest that he is likely to engage in discussions on wide range of contentious issues between Washington and Pyongyang. His direct flight from the US to North Korea (when no official relations between the two countries exist) and a prompt meeting with the North Korean leader Kim Jong Il further suggest this. It is hoped that his visit will pave a way to a breakthrough in the deadlocked situation on nuclear disarmament/security guarantees/normalization of relations.