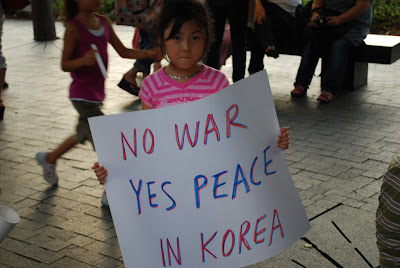 Today, July 27, is the 56th anniversary of the signing of the Korean War Armistice. Though the all-out fighting came to an end on this day in 1953, technically the war is not officially over since the promised peace treaty between the belligerents (North Korea and China on one side and the U.S. on the other side, representing the U.N. forces that fought in the conflict) has not materialized to this date. The continued presence of U.S. troops in South Korea, holding onto the title of the commander of U.N. forces in Korea, testifies to this unfinished business.

This is odd and anachronistic since political dynamics and international relations have changed drastically since the war: 1) China and the U.S. have fully normalized relations, 2) both South and North Korea have joined the United Nations (which makes the U.N. Command in Korea in essense defunct), 3) the two sides of Korea have signed a non-agression agreement. The only relations that has not shown change is the U.S.-North Korea relations, which continues to operate from the Korean War mentality. Of course the path towards permanent peace in the Korean Peninsula is complicated and uneasy, yet the U.S. is in a position and responsibility to move the momentum -- along with North Korea -- beyond the Korean War Armistice status and towards firmer peace/security guarantees for all parties concerned in the region.

In the U.S., a national grassroots campaign (National Campaign to End the Korean War) is sponsoring candlelight vigils across U.S. cities (Honolulu, SF, LA, NYC, DC) to call for the replacement of the Korean War Armistice to a peace treaty. The above photo is from the DC event.