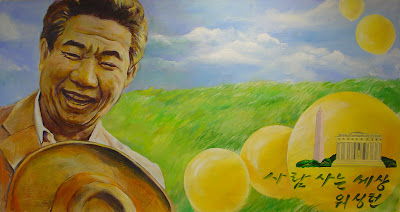 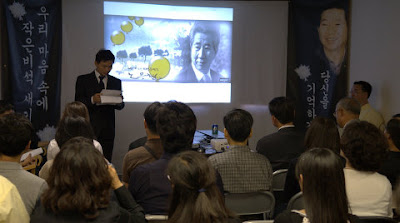 On July 10th, Koreans in numerous locations around the world held the "49 Jae" ceremony (a Buddhist tradition of honoring the spirit of the dead on the 49th day following a death) in honor of the late, former President Roh Moo-hyun, within South Korea and overseas (including Australia, Germany, and the United States). The extent of widespread mourning and concern indicates Roh's legacy as a stalwart defender of democracy and justice, and an affirmation of Roh as a true representative of the interests of common folks. Moving beyond mourning, grassroots and voluntary groups have been formed in various locales to continue to advocate for democratization, human rights and social justice in South Korea.

The photos above are from the ceremony sponsored by a group in the Washington, DC area. The mural was hand painted by volunteers, and messages from the participants were pasted on the mural, which will be delivered to the town of Bongha in South Korea, the home town of President Roh.