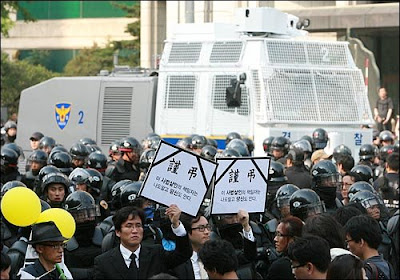 A group of scholars in North America concerned about the present political situation in Korea have drafted a joint statement for Korean democracy. To endorse the statement, send your name and institutional affiliation to Korea.Democracy@gmail.com

The following represents the considered view of professors and researchers at colleges and universities throughout North America whose thoughts are always with Korea and Korea's democracy. In light of recent developments in South Korea, we, the undersigned, cannot but express grave concern. Nurtured by the toils andsacrifice of many, Korea's democracy is a proud asset of the Korean people. The world has watched as the Korean people have moved deliberately, with great determination and at great human cost, from dictatorship toward democracy, over the last six decades. Regrettably, since the inauguration of the President Lee Myung-bak administration, Korean democracy has lost its way.

A democracy must guarantee the freedoms of assembly and association, not only allowing the people to select their own representative through votes but also inorder that they may express diverse political opinions. We have observed how the power of the state suppressed last year's "candlelight vigils," has issued subpoenas even to ordinary citizens who had participated in the protests, and is restricting the online exchange of ideas. The recent police blockade of Seoul Square is another egregious example of the government of President Lee Myung-bak denying the Korean people the most basic of democratic rights, the freedom to assemble.

A democracy acquires a capacity for self-regulation through the free press. We note with distress that the Public Prosecutor's Office has questioned journalists critical of the government, and the replacement of major broadcasting networks' executives with pro-government figures has infringed upon the professional autonomy of rank-and-file reporters. A foundation stone of a democracy, the free and independent press has suffered serious damage.

The Constitution of the Republic of Korea enshrines a system of checks-and-balances among the executive, the legislative, and the judicial branches of the government. We regretfully recognize and call attention to the fact that since its inauguration, the government has not upheld the principle of checks-and-balances. Moreover, the principle of justice through even and equal application of the law is under attack as can be evidenced through the arbitrary actions of such state organs as the PublicProsecutor's Office, the police, and the National Tax Service.

Speaking for North American scholars interested in the health and strength of democracy in Korea, we express deep concern over the regression of democracy in Korea. Heart-wrenching incidents such as the death of forced evictees during the police's suppression of their protest, the suicide of special contract workers, and the shocking decision by the former president to end his own life are all tragic consequences of a democracy that is taking backward steps in Korea; they highlight a democracy in crisis.

A democratically elected government cannot disparage its own people, because the mandate to govern derives from the people. We, the undersigned, urge the governmentof President Lee Myung-bak to recognize its responsibility for the democracy that has regressed and reorient itself as a government that respects the people's sovereignty and democratic rights. The nation's pride, the Korean democracy must again find its direction and return to the natural path of serving the people.