Both Korean Teams Headed to the World Cup 2010 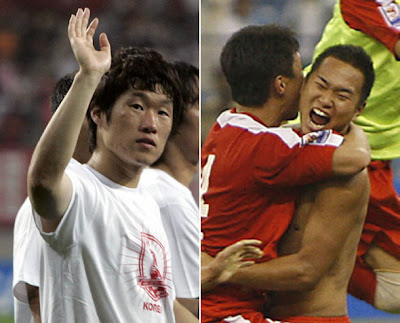 Followup to: Both Korean Soccer Teams Within Reach of the World Cup

In a respite from tensions in the Korean Peninsula, both South and North Korean national soccer teams have advanced to the World Cup 2010 in South Africa -- the first time that both Korean teams have qualified to the final rounds together. It will be eighth qualification for the South Korean team (left photo with star player Park Ji-sung), and second for the North Korean team (right photo), after its astonishing feat in the 1966 London games. Already, there are speculations that North Korea and the U.S. teams may be placed in the same group.