Both Korean Soccer Teams Within Reach of the World Cup 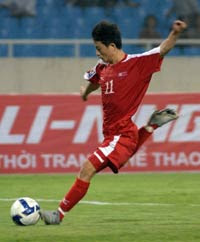 Good news for Korean soccer fans -- in the south or the north, or overseas. Both national teams have good chances of advancing to the 2010 FIFA World Cup in South Africa, following North Korean team's 1-0 upset win over Saudi Arabia [photo of the North Korean scorer Mun In Guk, from goal.com] and South Korea's 1-1 tie with Iran. These results put South Korea on top and North Korea on second in the qualifying round group in Asia, which will let both teams from Korea advance to the World Cup if they maintain their current standings.

Historically, South Korean men's team has fared better in international games, whereas North Korean women's team has made its mark in international competitions. The South Korean national team has played in the World Cup in 1954 and in every tournaments since 1986, culminating in its entry to remarkable semifinal stage in the 2002 games in Korea/Japan. The North Korean team played only once in the World Cup, in the 1966 games in England, but reached astonishingly to the quarterfinal stage by beating the favorite Italy. This feat was chronicled in the documentary The Games of Their Lives by the British filmmaker Daniel Gordon.

If both teams advance to the World Cup, it will be the first Cup where both teams from Korea will compete. In their previous qualifying match together, the two sides of Korea played to a draw. The next match together is in April 1 in Seoul. Perhaps the inter-Korea relations will have regained some normalcy by then.