Time to Defuse Escalating Tensions in the Korean Peninsula 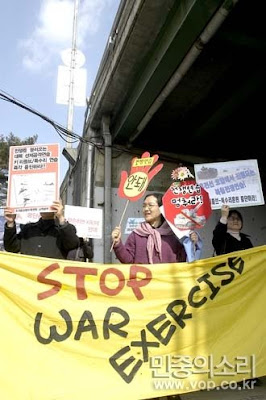 The situation in the Korean Peninsula is getting tense again: inter-Korean relations has nose-dived to a rock bottom; the military hotline between the two sides of Korea has been suspended; South Korea and the U.S. armed forces are engaged in a large joint military exercises ("Key Resolve"); North Korea says it cannot guarantee the safety of foreign and South Korean civilian aircrafts flying in its airspace; North Korea is preparing for a rocket launch (claimed by the North as a satellite, but assumed as a long-range ballistic missile in the West); North Korea declares any attempt to shoot down the rocket as a war provocation.

At this time of escalating tensions, all parties (mainly North and South Korea, and the U.S.) should refrain from engaging in actions that are deemed provocative by the other side and step up diplomatic efforts at a negotiated settlement.

U.S. Special Representative for North Korea Policy Stephen Bosworth is in Seoul, in his tour of Northeast Asian nations. Though he may secretly meet a North Korean representative in Beijing, a meeting with North Korean officials has not been officially announced. This seems odd that a stop-over at Pyongyang is noticeably absent when the main policy issue of concern is on North Korea.

[Photo from the Voice of People in South Korea shows protests against the joint military exercises.]

Although US/ROK spring exercises are not new, the more bellicose response from the DPRk is. One wonders who is in charge in the DPRK, as currently they seem to be moving away from the policies promoted by Kim Jong Il, and in fact by his father Kim Il Sung in his final year or so.