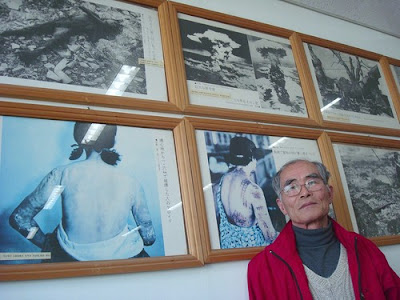 The Los Angeles Times carried an in-depth look at Korean atomic bomb survivors ("hibakusha" in Japanese) who are seeking compensation from the Japanese government. Unknown mostly to the world, 40,000 Korean civilians (one-quarter of the total victims) perished in the Hiroshima and Nagasaki atomic bombings, along with the Japanese. Most of the Koreans were forced laborers sent to Japan by colonial authorities to work in military factories and mines. In the case of the southern Korean town of Hapchun, highlighted in the article (the photo from The L.A. Times shows a survivor with pictures of Hiroshima bombing), 70 % of its population was relocated to Japan, resulting in a disproportionate number of atomic bomb victims, who returned home only to face poverty, prejudice, government neglect and loneliness.