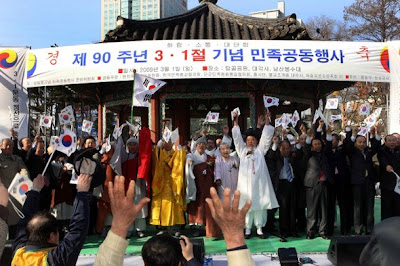 Today is the 90th anniversary of the March 1st Movement for Korean Independence, a nationwide demonstrations in 1919 that peacefully challenged the repressive Japanese colonial rule over Korea. The Japanese authorities' harsh crackdown resulted in over 7,500 Korean lives killed by the Japanese police. The photo from the Hankyoreh shows the anniversary celebrants reenacting the Manse chants ("long live Korean independence") in Seoul. The movement was inspired by U.S. President Woodrow Wilson's principle of "self-determination" right in his "Fourteen Points" speech, but the major powers ignored the Korean plea for independence and did not challenge the Japanese expansionism in Asia until two decades later. Koreans began to organize themselves to regain independence, in the Provisional Government in Shanghai and military operations in Manchuria.