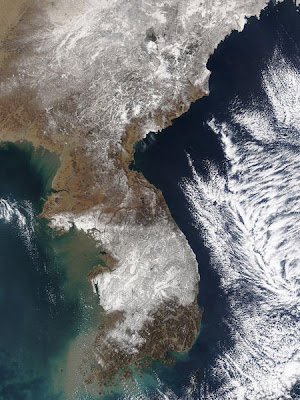 This op-ed appeared in the International Herald Tribune, by Christine Ahn and Paul Liem. Ahn is a fellow and Liem is chairman of the S.F.-based Korea Policy Institute.

"If North Korea is genuinely prepared to completely and verifiably eliminate their nuclear weapons program," Secretary of State Hillary Clinton said before she departed for Asia, "the Obama administration will be willing to normalize bilateral relations, replace the peninsula's longstanding armistice agreements with a permanent peace treaty, and assist in meeting the energy and other economic needs of the North Korean people."

Clinton's acknowledgment of the need to replace the armistice with a permanent peace treaty is a warm welcome to millions of Korean-Americans and Koreans hoping for a peaceful resolution to heightening tensions on the peninsula.

During her stop in Japan, however, she appeared to adopt the Bush administration's position that North Korea disarm as a precondition for normalization. Warning that a North Korean missile test would be "unhelpful" in moving relations with the U.S. forward, Clinton also stated, "If North Korea abides by the obligations it has already entered into and verifiably and completely eliminates its nuclear program, then there will be a reciprocal response certainly from the United States."

For nearly eight years, the Bush administration threatened North Korea with dire consequences for not acquiescing to demands that it disarm its nuclear weapons program before receiving the benefits of U.S. friendship. As a result, not only did the North continue testing its missiles - it also tested a nuclear weapon in 2006. Today, whether the international community likes it or not, North Korea is a nuclear power.

But there is an alternative. A decade ago, North Korea agreed to a moratorium on its missile testing, and continued to mothball its plutonium reactor under an earlier agreed framework, as a result of a peace initiative launched during the Clinton administration. In this instance both countries agreed to take the first step toward peace together, not one before the other.

Failure to heed this hard-learned lesson, by an administration that pledged to pursue diplomacy over bluster and war, would be tragic.

Denuclearization of North Korea is still possible. But in the absence of a common commitment to peace secured by a permanent peace treaty, it is unlikely to occur.

Let's dare to put peace first, for a change.

Hello
It has a nice blog.
Sorry not write more, but my English is bad writing.
A hug from my country, Portugal