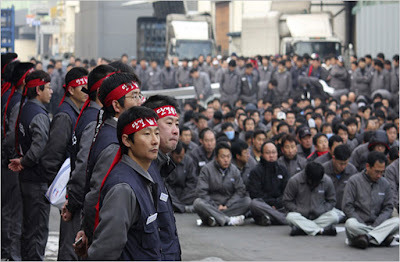 When U.S. companies dominated foreign company landscape in South Korea in the 80s, frictions sometimes arose between Korean workers and American management. The case of Pico, where an American boss fled Korea without paying back pay for his Korean workers, comes to mind. Now, as China has become South Korea's number one trading partner, frictions between Koreans and Chinese are surfacing, as indicated in this article in The New York Times about the Ssangyong auto company, with odd mixture of Chinese capital, labor unrest and technology transfer. [The photo from Reuters shows workers at Ssangyong protesting.]

Lee's government is so intoxicated with "restoration of Korea-US alliance" that it inevitably deepens a Korea-China friction that will cover economic, political and military fields. This is a real picture of "strategical relations" between two countries.