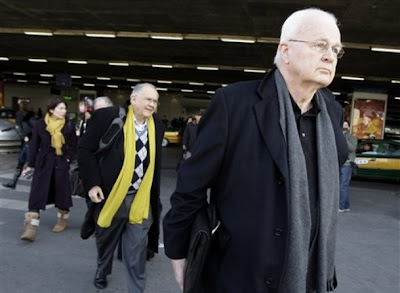 U.S. Secretary of State Hillary Clinton, in South Korea during her Asia trip, has named Stephen Bosworth as the newly-created position of the special envoy for North Korea, in addition to being named as the chief U.S. negotiator to the six-party talks on North Korean nuclear disarmament, energy aid and normalization of relations. Having returned from a recent academic trip to North Korea [the AP Photo shows Bosworth in Beijing after returning from Pyongyang], Bosworth, a former ambassador to South Korea, brings a wealth of experience and new insights to the stalled negotiations. Bosworth replaces Christopher Hill as the chief U.S. negotiator.

Here are some key facts on Bosworth [from Reuters]:
- Served as U.S. ambassador to South Korea from 1997-2000, a period that coincided with Seoul's historic efforts at rapprochement with isolated North Korea.

- Executive director of the Korean Peninsula Energy Development Organisation from 1995-1997, when that consortium began building two light-water nuclear energy reactors in North Korea under an earlier nuclear deal with Pyongyang that collapsed in 2002.

- The Dartmouth College alumnus also served as the State Department's director of policy planning and was ambassador to the Philippines from 1984-1987, the period when former President Ferdinand Marcos' government collapsed and the long-time strongman fled to exile in the United States.

- Won the American Academy of Diplomacy's Diplomat of the Year Award in 1987.