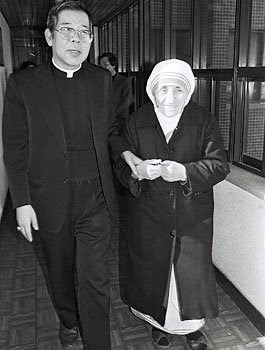 One of the long-time, leading figures of South Korea's democratic movement, Cardinal Stephen (Sou-Hwan) Kim, has passed away. [The photo shows Cardinal Kim with Mother Teresa on her visit to South Korea, from Yonhap] He was a strong advocate of human rights and democracy during the heydays of authoritarian rule in South Korea by former generals in the 80s and tirelessly supported democracy struggles that resulted in South Korea's first open presidential election in 1987. More.