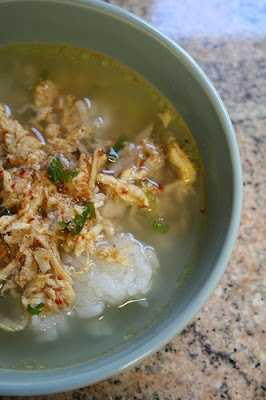 Are Americans warming up to North Korea? A food and cooking blog featured a "North Korean chicken soup" [photo from Muffin Top blog]. Of course, for the uninitiated, "North Korean" here does not mean literally that of current North Korea, but to a northern Korean style of cooking, which some Americans find more inviting (though bland but comforting) than spicy and salty southern Korean style cooking that is prevalent in Korean restaurants.

The division of Korea may have somewhat cut off the two styles of cuisine from each other, but the northern style lives on through refugees from northern Korea who settled in southern Korea or overseas in the midst of the division and the war. And of course, the northern style can be tasted in current North Korea as well. And a few Pyongyang-style Korean restaurants do brisk business in South Korea.