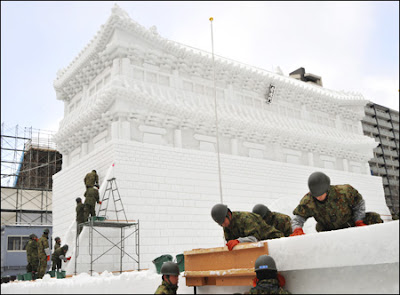 In this interesting photo from the AP/Yonhap, Japan’s Self-Defense Force soldiers are putting the finishing touches on Korea’s historic gate of Namdaemun ("The Great South Gate," the original name is Soongraemun) made of snow in preparation for the 60th Sapporo Snow Festival in northern Japan. This seems like a welcome and friendly gesture in memory of the Korean cultural icon Namdaemun, which was destroyed by arson fire last year. And it is customary for famous building or people of previous year to be featured in the Sapporo snow festival.

But one wonders, are these young Japanese soldiers and their peers, getting exposure to full and truthful history of Japanese colonial and militaristic expansion in Korea and Asia, in light of continuing controversy over revisions of Japanese school textbooks that try to whitewash past wrongdoings of the Imperial Japan? Koreans still have vivid and painful memories of Japanese soldiers passing these gates to Seoul to forcefully annex Korea and institute a harsh colonial rule over Koreans for 36 years. With continuing controvery over the Japanese government's refusal to offer formal apology on the "comfort women" issue and the disputes between Korea and Japan on the Dokdo Islands and the international naming of the Sea of Japan (East Sea), the bad feelings of colonial legacy continue, waiting for more complete historical reconciliation.