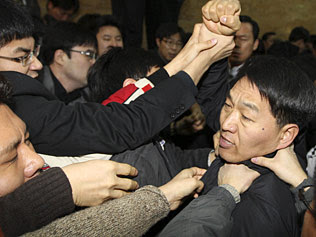 After 12 days of contentious brawls, scuffles and a sit-in by legislators and staff, the South Korea's National Assembly has returned to normalcy, as the parties have agreed to postpone voting on controversial bills until February.

The ruling Grand National Party accuses the opposition parties on disruptions, but the GNP is also responsible for instigating the parliamentary crisis by trying to railroad bills (such as the contentious Korea-U.S. Free Trade Agreement) in locked committee rooms, using its majority advantage.

Filibuster, which is a common parliamentary procedure in the U.S. Senate, does not exist in Korea, so minority lawmakers sometimes have to resort to unorthodox methods to prevent the majority party from steamrolling legislations without deference to minority concerns.

President Lee Myung-bak and the GNP may have been anxious to reap legislative victories, but South Korea's international image and democratic gains have been tarnished with this crisis. In order to avoid similar imbroglios, Korean politicians really need to work on consensus-building, respect for minority views, and making compromises.