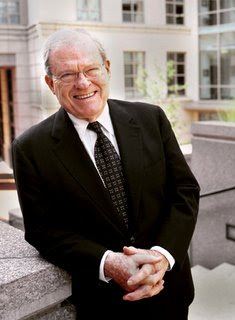 James Laney is former U.S. Ambassador to South Korea (during the Clinton Administration) who helped resolve the 1994 nuclear crisis with North Korea. His other ties to Korea include service in army counter-intelligence in Korea and later as a missionary to Korea (he is also an ordained minister). He is also former president of Emory University.

As an advocate of engagement policy with North Korea, Laney has long called for the U.S. to engage in direct talks with North Korea. In his recent speech in Seoul on the President-elect Barack Obama’s North Korea policy, Laney suggested sending a special envoy to North Korea, such as former U.S. Secretary of State Henry Kissinger, former North Korea Policy Coordinator William Perry and former Senator Sam Nunn.

His speech was marked with the call for a peace treaty to end the Korean War truce:

"... One item should be at the top of the agenda, however, in order to remove all unnecessary obstacles to progress, that is the establishment of a peace treaty to replace the truce that has been in place since 1953. One of the things that have bedeviled all talks until now is the unresolved status of the Korean War. A peace treaty would provide a baseline for relationships, eliminating the question of the other’s legitimacy and its right to exist. Absent such a peace treaty, every dispute presents afresh the question of the other side’s legitimacy. Only with a treaty in place will both sides be relieved of the political demand to see each move as conferring approval or not.

After more than a half century, it is time for us to come to terms with existence simply as a fact, and not see it as a concession. Further, a treaty would reduce the uncertainties about future policy which inevitably accompany changes in administration, in either South Korea or the US, since it is based upon ratification by the respective legislatures..."