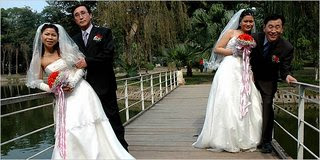 A South Korean court found a man guilty of marital rape, in the first-ever ruling in Korea to recognize spousal rape. Moreover, the victim is a non-Korean spouse in arranged international marriage (such as the ones in the photo), highlighting the dangers of failure and violence in such arrangements. The court, however, sentenced the Korean man with a suspended prison term.

This highlights immense problems facing Korean women in the modern Korean society, despite gains in democracy and human rights. South Korea trails in gender equity amongst advanced economies (even though it has a Ministry of Gender Equity) and has the highest rate of rape per population in Asia. Violence against women, sexual discrimination in workplace and sexual harassment against women are rampant. It was only few years ago that women gained the rights to inherit family properties. Various Korean women's rights advocacy groups are working to address these issues, but the Korean society as a whole will need to work towards redressing the problem.