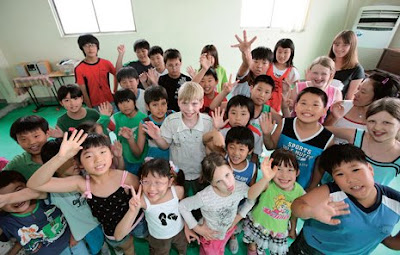 Is this the new face of Korea? The photo from The Hankyoreh21 [in Korean] shows multiethnic students of the Asia Community School, an alternative school for the children of immigrants, migrant workers and Korean families.

Koreans tend to take some "pride" in the homogeneity of the Korean society, but this is no longer the case. With the development of advanced economy and eager infusion of globalization in South Korea, the flow of foreign immigrants, migrant workers, and temporary workers has steadily increased over the past years, leading to 1.1 million foreigners now living in South Korea. Moreover, 10 percent of marriages in South Korea today involve non-Korean spouses (in the countryside, 40 percent of Korean men marry non-Koreans, mostly from Southeast Asia), leading to multiethnic/multinational offsprings.

These trends, coupled with low fertility rate for Koreans, are creating a multiethnic, multiracial and multicultural Korea. Today, it is common to see foreign immigrants appearing in Korean television shows and working in educational facilities (teaching English) or factories. In the countryside, a majority of students have multiethnic background.

Despite new opportunities for these immigrants and their children, however, they still face racial/ethnic prejudices, discriminations, and sometimes, abuses and human rights violations. According to Choi Hyunmo of Korea Migrant Workers Human Rights Center [in Korean], "Of the total number of immigrants in Korea, 500,000 are migrant workers, most working for low wages under harsh working conditions. The undocumented workers face additional hardships, exploitations, and a lack of social service support."

As immigrant population and international marriages in South Korea grow, the Korean society and government will need to address and redress these issues.