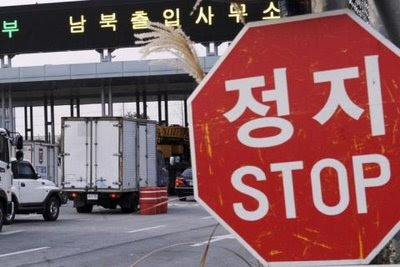 What a difference a new administration in South Korea brings to inter-Korea relations? For the past decade, inter-Korea relations warmed and progressed as the result of rapproachement policies and increased exchanges and cooperation in economic and cultural fields. But with the advent of the Lee Myong-bak government, which began a hardline policy towards North Korea, North Korea is reciprocating with its reprisals:

All these ominous developments come at a time when the six party talks may bring a resolution to the nuclear disarmament issue, with the outgoing Bush administration belatedly willing to negotiate for a settlement and the incoming Obama administration committed to moving forward with a satisfactory settlement. Inter-Korea bickering at this critical moment is not helpful. Both sides are getting criticisms. South Korea is criticized for abruptly altering policy towards North Korea, thereby provoking a tension, and North Korea is criticized for politicizing the turn of events, and its unwillingness to compromise on contentious issues. At this critical juncture, both sides should play down the inflamatory rhetoric and resume inter-Korea dialogue in order to find a mutually-satisfactory resolution to the current imbroglio.