"Korea Is One" Heard in the Beijing Olympics 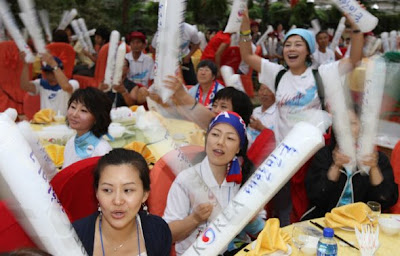 Despite the recent chill (or reversal) in inter-Korean relations, slogans such as "Korea is one" and "Reunified Korea" are again heard in the venues of the 2008 Beijing Olympics. The two governments failed to come up with a joint procession in the opening ceremony under one flag (as they did in the two previous Olympics) and the much-anticipated, government-sponsored joint cheering squad failed to materialize.

The two sides of Korea lost the opportune moment to convey the desire for reconciliation and reunification to the global world of billions of people. In this vacuum, 400 Koreans from South Korea stepped in and formed their own civilian cheering group, who travelled to China and are engaged in cheering for the Korean teams and players -- irregardless of which sides of Korea they are from. Hopefully, this phenomenon will catch on to ethnic Koreans in China and Korean spectators to cheer for all Korean players and motivate North Korean cheering squad to do the same for the South Korean players.