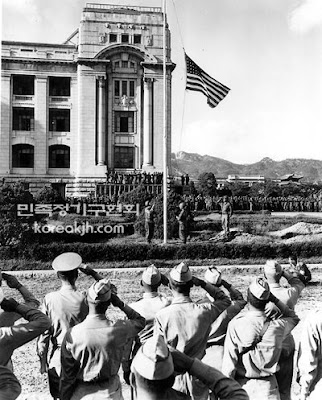 Today is August 15th, which is the Liberation Day in Korea, commemorating Aug. 15, 1945 surrender of Japan that ended the World War II. President Lee Myung-bak of South Korea is geting some flack by renaming this day to "National Founding Day" (60th anniversary of the establishment of a separate government in southern Korea in 1948). Critics argue that Korean government existed as the Provisional Korean Government-in-Exile in China for three decades prior to 1945 and that the establishment of the Republic of Korea in 1948 helped seal the division of Korea further.

Korea was not liberated truly from foreign intervention in August 1945 since Korea came under the spheres of influence by another two foreign powers (the US and the USSR). Moreover, Korea was not handed over to the Koreans to rule, but it was divided in half.

Much misconceptions exist about this transitional period, from 1945 to 1948. For example, a common belief is that the division of Korea was agreed upon by the allies at the Potsdam Conference, but during Cairo and Potsdam Conference discussions on the future of Korea, no mention was made specifically about a division of Korea, only that Korea would be granted independence in due course following the war. Without a clear agreed plan and with the Pacific War coming to end hastily, and Soviet troops nearing Korea and Japan, with US forces far away in the Pacific, the US came up with a unilateral and quickly-drawn proposal to divide Korea in half into two occupying zones (as Imperial Russia and Japan had proposed many years before when their ambitions on Korea clashed) so that the US would at least get a foothold in Korea even though it was not feasible to reach Korea in time to challenge the Soviet occupation of whole Korea. The US was surprised that the Soviets complied to this proposal and stopped at the 38th parallel. If a proposal for joint occupation of whole Korea was made, as in Austria, it would have expedited decolonialization of Korea and would have left Korea in one piece to chart its future. But that was not the case.

The US side maintains that the zonal occupation proposal was a temporary measure, a military one and not a political one, but history tells us that that fateful decision sealed a series of events that made the division of Korea permanent: different approaches to decolonialization and demilitarization of Japanese forces in Korea, the trusteeship confusion and debacle, deep polarization of political forces in respective zones, political assassinations and violent purges, uprisings and beginnings of civil war, border clashes that led to all-out war, foreign military interventions, precarious armistice with lack of peace treaty, security-first policies and political repression .......

[Photo shows US troops, upon "liberating" southern Korea in August 1945, raising Stars & Stripes in front of the Japanese colonial administration headquarter building in Seoul, which was much hated by Koreans for brutality of the colonial rule. In a way, it would appear that Americans are replacing Japanese as colonial overseers, as US soldiers moved into the military compounds in Seoul vacated by the outgoing Japanese colonial forces. Only now, after more than six decades, are US commanders vacating the Seoul compounds for a new consolidated headquarters south of Seoul.]