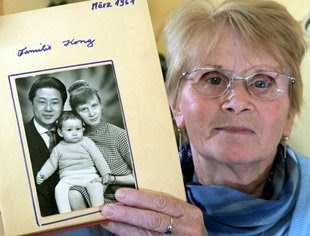 We have seen family reunions between separated Koreans in divided Korea, but this is an unusual, first case of a non-Korean reuniting with a separated Korean family member.

Renate Hong (photo, holding a family picture from 1961), 71, a German woman who married a North Korean foreign student in then-East Germany in 1960, was separated from her husband when North Korean students were recalled to their homeland. After many years (47 years) of trying to find the whereabouts of her husband and reunite with him, she is finally visiting North Korea, along with her two middle-aged sons, to meet with her husband.