Escalation Over the Dokdo Islets 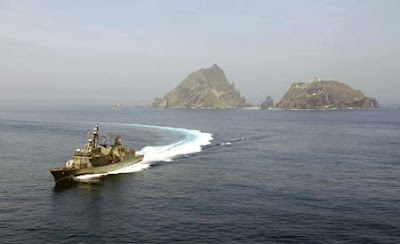 Korea (both sides) and Japan disagree on the name of the body of seawater between them: the East Sea ("Dong Hae") or the Sea of Japan. But it is the Dokdo Islets in this sea that has caused much tensions and raised emotions between Korea and Japan since the World War II, with both sides claiming territorial sovereignty over them.

Recent escalation started with the change in Japanese textbooks that challenged Korean claims and likened the islets, called Takeshima in Japan, as "disputed land," which resulted in a recall of South Korean ambassador from Japan, massive outcry in Korea, with some boycotting Japanese goods.

In another development, a proposed name change of the islets in the Libray of Congress classification system to Liancourts Rocks (named by the West after a French whaling ship that almost crashed on the rocks) was postponed by efforts by a Korean librarian in Canada.

Coincidentally, perhaps with some nudging by Japan, the U.S. Board on Geographic Names (BGN) suddenly changed its designation of the Dokdo islets in its web database from Korean sovereignty to "undesignated sovereignty." After protests and diplomatic lobbying by Koreans, President Bush ordered the reversal of the name change and reinstatement of the original designation.

The Dokdo Islets' territorial issue is a sensitive issue for Koreans since it touches on the painful legacy of the Japanese colonialism. Despite traditional Korean claims to the islets, Japan annexed the islets in 1905, when Korea was under Japan's forced protectorate and could not challenge the move diplomatically or militarily, in a precursor move to the annexation of whole Korean peninsula.

At the end of the WWII, the US forces took over the islets for bombing practice purposes, and eventually handed over to South Korea. Then-president Rhee Syngman, in part to deflect public attention or opposition, raised the nationalistic pitch and "Dokdo is Our Land" became a catch phrase in Korea. Since then, South Korea and Japan normalized relations and became amicable trading partner, but Korea has not yielded on the issue of Dokto to the Japanese pressure. As the photo of recent South Korean naval exercises near Dokdo shows, South Korea is determined to defend the islets militarily if necessary.