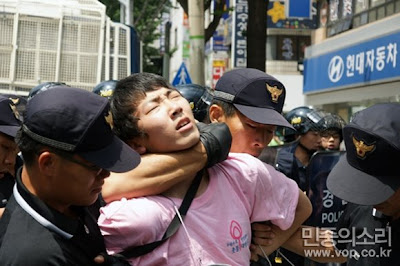 Back to the past? Is the Lee Myung-bak government trying to turn back the clock by resorting to hardline policies of the past military dictatorships in South Korea. The police has been arresting protesters wantonly, handling them roughly in the process. (Top photo: recent arrest of protesters. Bottom photo: riot police practicing rounding up of protesters) Moreover, organizing offices of recent candlelight protests have been ransacked, with the leaders put on arrest warrent. The upcoming visit of President Bush to Seoul gives added excuse for draconian, security measures, with some Korean observers likening the situation as that of martial law in South Korea in the 70s.