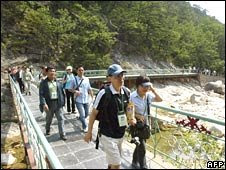 In an unfortunate incident, a South Korean woman tourist was shot dead by a North Korean soldier (after warning shots) after wandering into a restricted area in the Mt. Kumgang (Geumgang-san, Diamond Mountains) area, a tourist zone and symbol of cross-border reconciliation opened to South Koreans in 1998. There have been deaths of South Koreans in that area by accidents or illness, but there has not been an incident such as this one -- which also reminds Koreans of the tense inter-Korean relations.

This news came amidst the announcement of South Korean President Lee Myung Bak's offer to resume dialogue with North Korea, in a reversal of his stated hardline approach. Also, the six-party meeting had resumed in Beijing to resolve the contending issues of verification and aid. The cross-border tourism is on hold due to this incident, how the two Korean governments handle this sensitive incident will be a barometer of forthcoming relations.