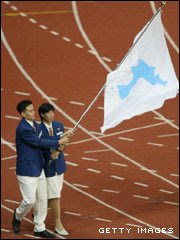 Follow-up to KR postings: Sports and Reconciliation in Korea;
Train to Ferry Koreans from Both Sides to Beijing Olympics

The Beijing Olympics is around the corner, but the promised joint, inter-Korean cheering squad (travelling by train across Korea, crossing the DMZ, towards Beijing, mobilizing Koreans in the two side of Korea and ethnic Korean in China to cheer together for the Korean team) --let alone a unified team-- is nowhere to be seen. As indicative of the recent chill between the two sides of Korea, the two sides of Korea will not even march together under one symbolic flag of the Korean peninsula (photo), as they have done in the past few Olympics and international sporting events.

The opportune moment to showcase Korean reconciliation on the world's biggest stage, near the Korean peninsula, seems to have fizzled. This development is unfortunate, especially in light of the resumption of the six party talks and the unprecedented discussion of Korean peninsula issues at the six-nation meeting of foreign ministers in Singapore. Peace and normalization of relations (between Washington and Pyongyang) may be on the horizon, yet the two sides of Korea have diverged further.

With the policy reversal from the new Lee Myung-bak administration of South Korea earlier this year, inter-Korean relations have deterioriated, exasperated by the killing of a South Korean tourist in the Mount Kumgang (Geumgang) and North Korea's refusal for further investigation. Shortly after that incident, as if a jinx is in place, a North Korean worker in the South Korean-operated Kaesong industrial complex was killed in an industrial accident, which was not covered in the press as much. Inter-Korean dialogue and exchanges that have been widespread and successful in the past ten years now have virtually come to a standstill -- or a reversal.

Very depressing... just when it seemed like public pressure was having an effect on the Lee regime.

Was the anti-beef, anti-Lee movement affected at all by the recent Mt. Geumgang tragedy? Has the Lee regime used it to deflect attention and criticism?

Thanks, as always, for your reports.

Seems like the Mt. Geumgang incident and the Dokdo Island dispute are deflecting attention, just when the US beef began re-selling in South Korea. But Lee's popularity in polls still is in the teens.

In order to suppress further outbreak of demonstrations, the Lee government is even brining back the full-force, riot-suppressing police squads, similar to the dreaded "White Skull Squad" of the 80s that brutally handled protesters. It seems history is reversing itself in South Korea.