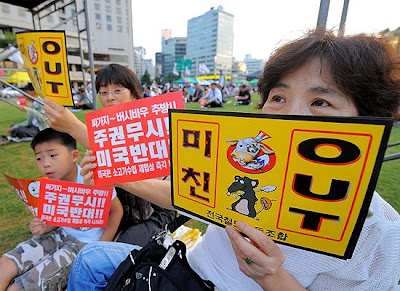 Recent protests in South Korea were marked with participation by tech-saavy younger generation. Spontaneous gatherings and decentralized mobilization were made possible by the use of internet chat rooms, text messages on cell phones, video sharing, and reports by "citizen reporters." Here is an article on this phenomenon:

In June 1987, Seoul's City Hall Plaza reverberated with a chant that signaled the end of military rule in South Korea: "Dokjetado!" or "Down with the dictatorship!" In June this year, the plaza has once again become a rallying point for crowds calling for the removal of an unpopular government: "Out with Lee Myung Bak!"

But the similarity ends there. And in those differences lies the challenge for Lee and anyone else engaged in politics in this very highly wired country, where the Internet has merged with South Koreans' penchant for street demonstrations. "The Internet fits Koreans' quick-paced temperament," said Kim Il Young, a political scientist at Sungkyunkwan University in Seoul. "As you have seen recently, when the nation's world-class Internet infrastructure, its nationalism and its hot tempo all come together, you have a major conflagration." More

The Western media is beginning to report this, and the reports have not been favorable. The majority of non Koreans cannot understand why the Korean public remains misinformed about the safety of US beef. It is seen as more Korean irrationality, and even Obama has commented on the unfairness of Korean trade practices.

The Western media is beginning to report this, and the reports have not been favorable. The majority of non Koreans cannot understand why the Korean public remains misinformed about the safety of US beef. It is seen as more Korean irrationality, and even Obama has commented on the unfairness of Korean trade practices.

Why not teach Korean students how to conduct proper research, analysis and critical reasoning instead of rote memorization? This would solve most of Korea's current social problems, which are caused by irrationality and factionalism.

You make too many generalizations.

The protests are not just about the safety of US beef, rather they represent public outcry over Lee Myung-bak's series of unilateralism -- his approach to unpopular policy implementations ranging from the Grand Canal proposal to the lifting of the US beef ban without any public or parliamentary discourse on the issue.