Protests Continue in SK -- Joined by the Clergy 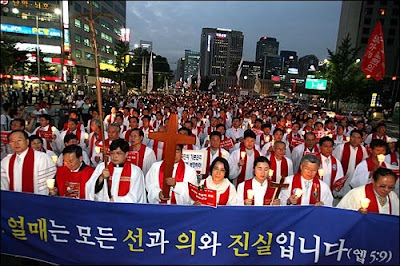 With additional safeguards on US beef imports -- as the results of massive public protests in past two months -- the US beef began selling in Korean markets. But the protests and public anger at the Lee Myong-bak government have not subsided, and a national boycott of US beef is being called for. Amidst these developments, the clergy members, who wield powerful influence in the South Korean society, have come out on the streets to show solidarity and support to the candlelight protesters. Not since the heydays of military dictatorship in South Korea has South Korea seen such a public protest by the clergy -- not a good sign for President Lee, who is also an elder in a Korean church.

They are all fools. We all know that the 'mad cow' and 'american beef' scare was all a lie.

That's too simplistic. There is much more in play here: food safety, food sovereignty, questionable handling of the issue by the Lee administration, citizens' right to air their concerns, etc.