Train to Ferry Koreans from Both Sides to Beijing Olympics 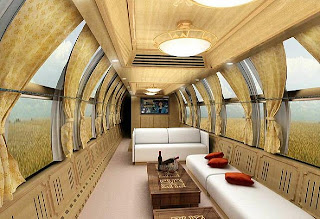 As revealed in the October inter-Korea summit meeting, a joint Korean cheerleading squad will be going to the 2008 Beijing Olympics -- together, using railroad through the Korean peninsula and onto China. It will take eight hours from Pusan to Pyongyang and 22 hours from Pyongyang to Beijing. That time will be well spent to foster bond between the two sides and melt away decades of mutual hostilities and misunderstandings. What better way for them to arrive in Beijing together and cheer for not just one side of Korea, but for the two sides of Korea, whenever each side will be playing.

Korail, the South Korean railway, has unveiled images (photo) of the train interior to be built specially for this historic trip, which emphasizes traditional Korean design elements and will be used for domestic travel afterwards. It would be highly desirable to see this kind of train getting regular services for inter-Korea rail travel.