"Will North Korea Become US Ally?" 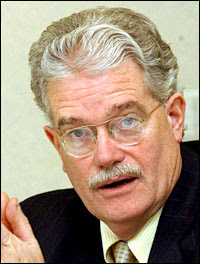 Well-known Korea expert Prof. Bruce Cumings of the University of Chicago ventured on this topic in his speech on the occasion of the 8th anniversary of the inter-Korean summit:

The sharp changes in North Korea policy accomplished by Kim Dae Jung and the Clinton administration were immediately challenged by George W. Bush, within weeks of his inauguration in 2001. Seven years later, the Lee Myung Bak administration appears to think that a daunting rupture occurred between the ROK and the U.S., and that it was the fault of Kim Dae Jung and Roh Moo Hyun thus requiring the new administration to repair relations with Washington.

The Bush administration seemed to think so, too, by inviting President Lee to the presidential retreat at Camp David, in total contrast to the disastrous reception Bush gave to Kim Dae Jung in March 2001.This negative tendency is almost always labeled “anti-Americanism,” as if Koreans were upset about Americans in general, rather than Bush’s policies in particular. But when we examine the evidence, it is quite clearly anti-Bushism. More