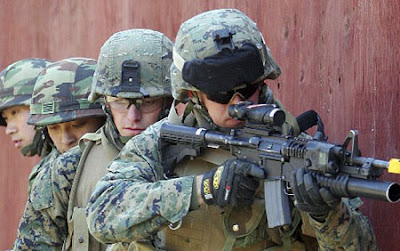 For over two decades, Doug Bandow has run counter to conventional Washington wonks' positions in his calls for the withdrawal of US troops from Korea, first as the researcher for the libertarian Cato Institue and now as a fellow at the American Conservative Defense Alliance. His latest article in National Interest Online:

Secretary of Defense Robert Gates has returned from the Republic of Korea (ROK), where he reaffirmed “the solid U.S. commitment to the defense of South Korea.” Troop levels will fall no lower than twenty-five thousand, to be reached after modest reductions this year. The goal, he adds, is to turn the relationship into a “twenty-first century strategic alliance.”

Actually, the right twenty-first century alliance is no alliance. More

Doug's writing you mentioned is interesting to read. His writing seems an echo to PRC FM spokesman Qin Gan's answers to press on May 27 and May 29. According to the spokesman, US-(Japan)-Korea military alliance was a "leftover" of the past. The United States should find a new way to adapt itself to changing reality in Northeast Asia. Anticipated normalization of relationship with the DPRK would provide a positive clue for it.