"An Anger in Korea Over More Than Beef" 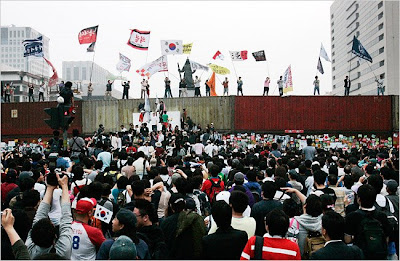 After six weeks of unending candlelight vigils and street protests in Korea, the mainstream US media is finally taking notice of the events, as the massive demonstrations suggest a historical parallel from the late 80s when the military-dominated government yielded to public pressure and implemented democratization measures and paved a way for civilian-run government.

Somehow, embattled Lee Myung-bak has resorted to similar responses of the military dictators of the past: rough police crackdown, attemps to ban public demonstrations, denial of public sentiments and public discourse, and false allegation of "subversive forces." No wonder why Korean citizens are demanding the ouster of "dictatorial government of Lee Myung-bak."

Here is an analysis from The New York Times:

When tens of thousands of South Koreans spilled into central Seoul on Tuesday in the country’s largest antigovernment protest in 20 years, the police built a barricade with shipping containers. [see photo] They coated them with oil and filled them with sandbags so protesters could not climb or topple them to march on President Lee Myung-bak's office a couple of blocks away. Faced with the wall, people pasted identical leaflets on it, their message dramatically summarizing Mr. Lee’s image and alienation from many of his people: “This is a new border for our country. From here starts the U.S. state of South Korea.” More

It is already obvious that leftist anti-US agitators are behind the false rumors about US beef. This article gives some of the names:

1-The media: April 28th MBC's `PD Notebook" aired a program containing baltant falsehood, including the falsehood that Koreans are genetically susceptible to catching Creutzfeldt-Jakob Disease (CJD) from consuming beef (the researcher states he never said that - Koreans are only moe susceptible to the spontaneously arising form of the disease, not through beef eating).

2-Members of the Korean Teachers and Education Workers' Union have been pushing propaganda CDs and other materials on their students in an attempt to fan fears of death by eating American beef.

3-The usual suspects, such as leftist professional protestors like Oh Jong-ryeol, head of Solidarity for Reunification, among other organizations, politicians and labor groups have also jumped into the act as the protests evolved into a multi-organizational campaign criticizing both real and imagined faults of the Lee administration.

5- The Lee administration has not been effective in dealing with internet rumors and fear mongering campaigns conducted by groups like the KTEWU.

6- Finally, I blame the Korean scientific community, teachers and media, for not responsibly explaining the true science to the public. Of course, you can hardly blame them as they have been intimidated to perpetrate the lies. Actress Chung Sun Hee was forced to resign from her radio shows for making a statement about the protests. At least one teacher was fired. People are bullied into not telling the truth. This Korean custom is known as "wong ta."

Your reasoning sounds like Lee Myung-bak's government's when he questioned: "Who supplies the candles to the protester?" Isn't it a common sense that people buy their own candles?

When he asked, "Who is the instigator?," average citizens sprang up and held up signs saying "I AM the instigator." His attempts to blame on "pro-Juche elements" backfired. Whoever is behind the protests, how can Lee's approval rating plummet to 7 percent?