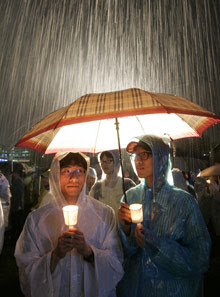 From The Economist: "There was little to celebrate as South Korea's president, Lee Myung-bak, marked his hundredth day in office this week. The president's approval rating is 21%, a fall of 31 points since his inauguration, according to Gallup, a pollster. Month-long protests against a decision to resume imports of American beef have grown in size and intensity. Many of the tens of thousands of people who gather nightly outside Seoul's City Hall call for Mr Lee's resignation." More