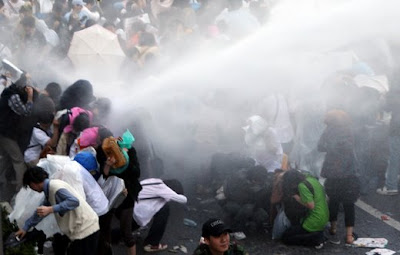 Looks like President Lee Myung-bak got more than what he bargained for when he unilaterally offered to lift the US beef import ban when he visited Washington in April to entice the Congressional approval of the Korea-US Free Trade Agreement. What he didn't foresee was the massive public outcry and backlash of his action that spilled into the streets with tens of thousands -- mainly young middle school students -- protesting in candlelight protests, worried about public health problem of consuming US beef with the stigma of the potential mad cow disease.

Now, Lee's approval rating has plummeted to a historic low (20 %) for sitting presidents, with his own conservative party baffled by Lee's actions, and the parliament paralized. South Korean citizens, who have elected Lee on the promise of prosperity and change, are now calling for his ouster already, angered by harsh tactics of police in suppressing the peaceful protests (see photo) and his continued disregard for consensus-building and public sentiments.

Moreover, the protests and outcry have moved beyond the beef issue to other unpopular initiatives and actions undertaken by the Lee administration in its first 100 days in office. As indicative of Lee's troubles and public sentiments, the ruling conservative party did not do well in the recent local elections. And although Lee has tried to yield to public pressure by asking the US to refrain from exporting beef from cattles that are older than 30 months, the public anger and protests have not subsided.