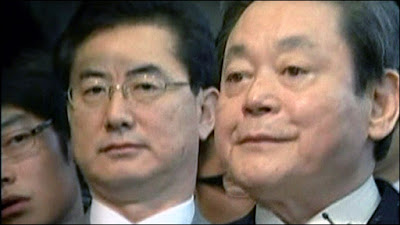 By Jason Lim (a research fellow at the Harvard Korea Institute) This opinion appeared in The Korea Times.

Declaring that he will "take all legal and moral responsibility and truly apologize for causing concern," Samsung Group Chairman Lee Kun-hee publicly resigned from the conglomerate that is responsible for 15 percent of South Korea's GDP after being indicted for tax evasion and breach of trust. He then announced a series of reforms that Samsung will undertake in response to the findings by the special prosecutor's office. Apparently, Lee Kun-hee's glorious run as the head of the most powerful business empires in Korea's history has come to an end. For now.

Depending upon which isle you sit in, Lee Kun-hee elicits dramatically different opinions. On one hand, he is the devil incarnate who has fundamentally corrupted and debased the ethical fabric of Korean society in his headlong and ruthless attempt to grow his business empire. On the other hand, he is the far-sighted executive who has overcome incredible odds and led Samsung onto the world stage to stand shoulder to shoulder with the foremost companies of the world. More