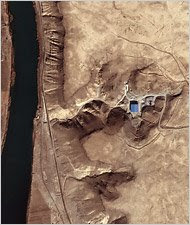 As the State Department officials tried to salvage the six-party process on nuclear disarmament/normalization of relations, the White House announced the alleged North Korea-Syria nuclear connection [photo: the site in Syria that was bombed by Israel]. Will this development escalate into another crisis like the "BDA" case (the dispute over North Korean funds at the Banco delta Asia in China that had previously stalled the six-party process) and threaten to derail the six-party process?

The timing and motive of the announcement perplexed many observers. See for example, The Seattle Times editorial, "North Korea policy sharpens the knives": "Confused by the belated revelations over North Korean help with a Syrian reactor of some sort? The best way to understand the method if not the substance is to think back to late December and the Iran saga." More